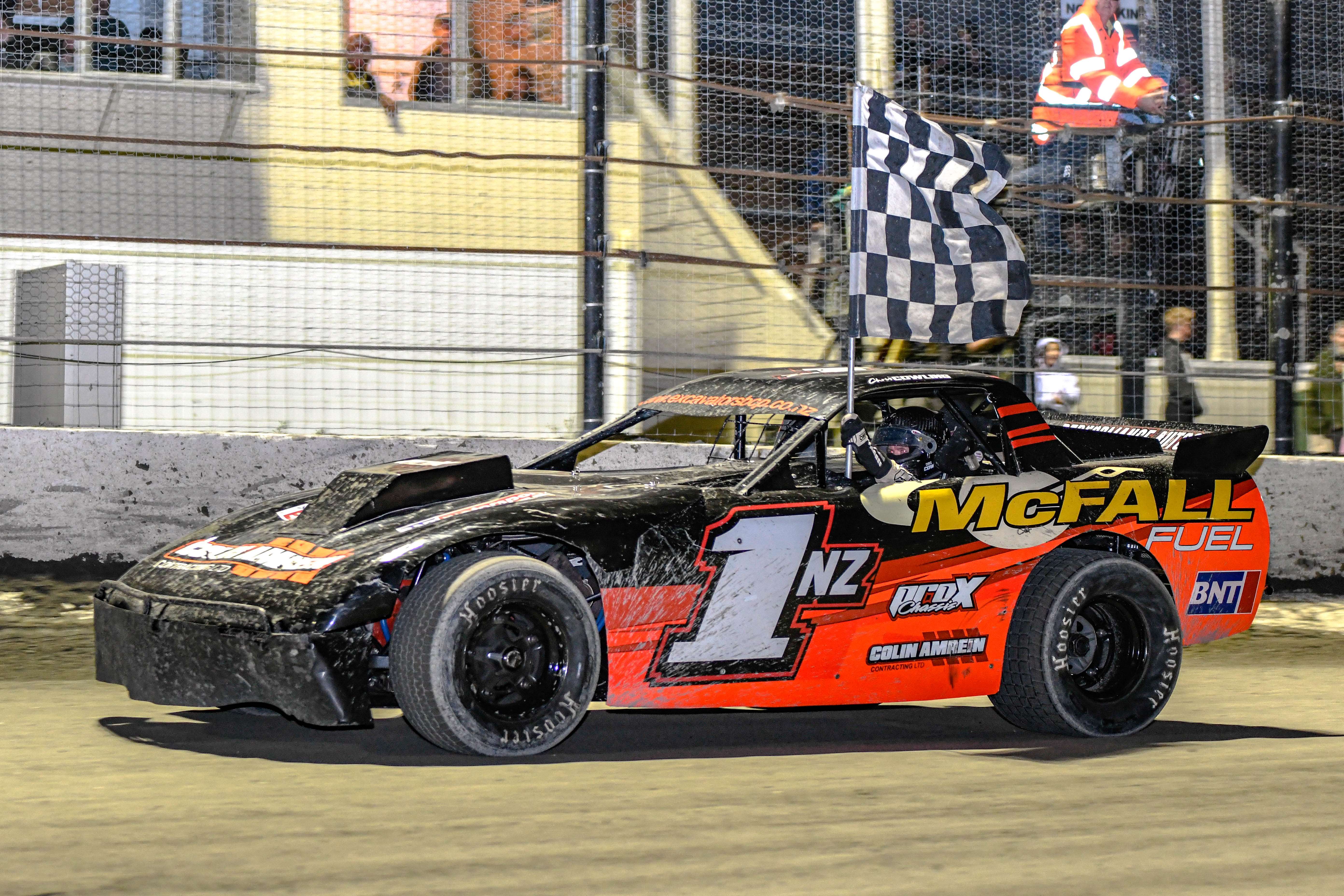 Jarrod MacBeth
The pits at Stratford Speedway filled with V8 Saloon cars on Saturday night as 18 drivers arrived for the Taranaki round of the Pit Stop Saloon series.

With current New Zealand champion Chris Cowling, former Champions Thomas Korff, Ethan Cook and front-running drivers like Daniel Cook, Jarrod Fletcher, Josh Smith and Mark Hinton among the entrants, the racing promised to be fast and furious. And that is exactly what it was.  After qualifying races and a pole shuffle to sort the starting grids for the 20-lap feature, the feature started with Jarred Fletcher on pole, Thomas Korff on grid two, Chris Cowling on grid three and Ethan Cook on grid four.  These fours drivers dominated the feature race that ran the entire duration without any cautions such was the calibre of the drivers racing.  Fletcher controlled the race for the first 13 laps until the impressive Chris Cowling made a pass to take the lead and cross the finish line first.  Meanwhile, behind Cowling, Ethan Cook was making a move and passed Fletcher for second place while Thomas Korff, who had dropped back to fourth place on the opening lap, nabbed the third step on the podium after also passing Fletcher with three laps to go.
With such a large field of cars, it was pleasing to see all races run without any cautions and drivers using the whole of the track with cars racing from the pole line to the wall.
The Stockcar class had four races on the night.  The first being for the Wayne Trott Memorial for first-year drivers, which was won by Karlin Painter-Dudley ahead of Jayke McGrath.  The next three were for the Heritage Shield, which was won by William Hughes after he recorded a win, a second and a fourth place.  Brad Podjursky came home in second place and Wellington driver Bryce Jensen was third.  There was some good bumper action in the class over the night, the most spectacular incident being when Tyler Wadsworth was rolled by Jayden Meyer in turn four.
Midgets raced for their King of the Mountain Champs and visiting drivers took the top three placings.  Tauranga racer Ricky McGough raced to second place in race one before coming home third in race two and then winning race three to win the trophy by one point from Palmerston North racer Chris Bagrie who had recorded a third and two seconds.  Kihikihi driver Mitch Fabish was third.
Supporting classes on the night included both Adult and Youth Ministocks.  Adult Ministock races were won by Roger Dettling. Liam Whelan and William Campbell while checkered flags in the Youth grade were carried by Jesse Whelan, Brayden Fale, Caleb Coxhead and Regan Ogle.